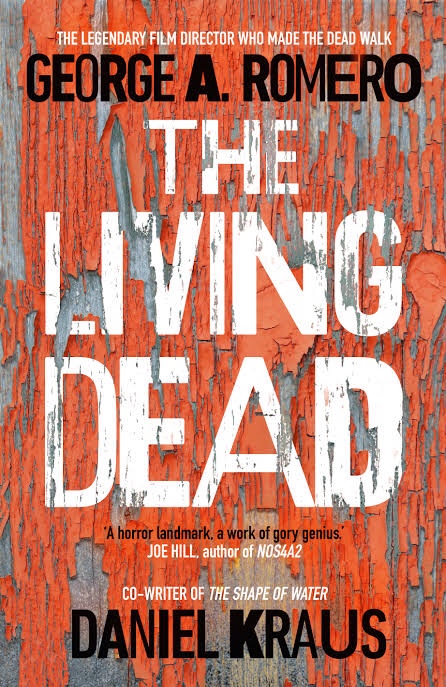 When I was ten or so, I was exposed to films that completely blew me away. Aliens, Predator, The Thing – I would go to school the next day and my friends and I would discuss who saw the gorier movie – was it Terminator, where he pulls out his damaged eye? Was it Blood Sport?

THE LIVING DEAD, begun by late legendary film-maker George A. Romero before his untimely death and completed by Daniel Kraus, a genius writer in his own way (we’ll get to why later), is the type of thrilling, gory as hell epic that I want to pass around to friends and fellow gorehounds, giddy as my old self, so we could marvel at its content.

A novel split into three distinctly different acts, it is a narrative that begins at the moment all hell breaks loose, using a cast of characters across several locations in America to show just how violently and gruesomely things are unfolding. From deep within the confined spaces of a morgue to a trailer park full of bickering personalities to a navy ship about to come home after its tour, it effectively shows how the outbreak unfolds and how these characters grapple with the mind-bending turn of events.

It’s something that we’re overly familiar with, the collapse of the world as we know it as the surge of ghouls come shambling along, but it doesn’t make these blood-splattered pages any less riveting, tense or effective – especially thanks to blistering fast pacing, punchy prose and delightfully descriptive gore.

As dizzying and delightful as the horror is, it comes underscored by sadness at George’s passing. If these pages are anything to go by, he was an imaginative and ferocious writer and I wished he had written more before he left this world.

However, with sadness comes a sense of joy. George’s ferocity in writing is continued, almost seamlessly, by Daniel Kraus, who has such a way with words that I couldn’t read this novel during any of the day’s meals! More than this, he honours what George was exploring with these films as much as he honours character or dialogue or the story in general.

I think fans of George will be utterly delighted to know that this story is very much George’s world, as lovingly and carefully engineered and expanded upon and complimented by Daniel’s fierce, wonderful writing. Like any of the DEAD films, there’s a meaty sociopolitical context we’re dealt with, from exploration of race to what feels like satire of the media to embracing religion in a new crazy world. It doesn’t feel heavy handed, it’s not something that’s flogging you to, ahem, death, but rather, I think it explores the festering evil lurking in the very people we live with or work with just enough to be memorable and effective.

The last act of the novel does feel a bit rushed though, I will say. Some things feel a bit sped up to get to some sort of climax and conclusion that, though ultimately engaging and effective, feels like it could’ve benefited from another 50 pages or so to develop more of the unfolding vision.

Ultimately THE LIVING DEAD is not just a thrilling and epic event that gorehounds can get behind, it goes deeper than that. It examines humanity – the good, the bad and the ugly and reflects on our animalism as we face uncertain times. It’s heady and topical and adds meat to the story.