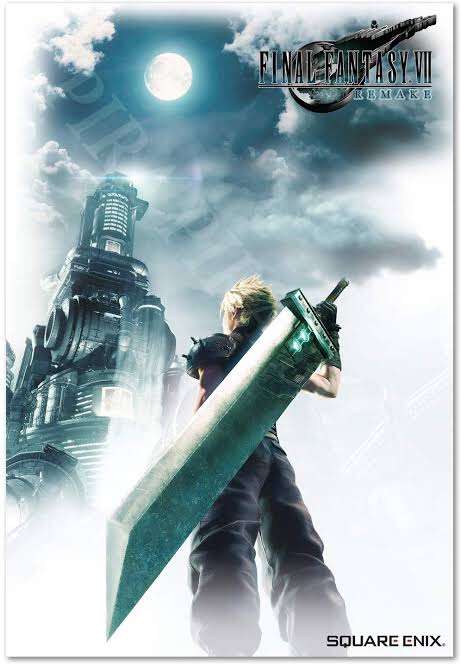 Well, here it finally is, folks! After several years in development, after rumblings of rumours , after tech demos and teases, the remake of Final Fantasy VII is out and available for your enjoyment and entertainment.

Myself, I am new to the saga of VII. I’ve never had the chance to play the original game way back when it came out originally and going into the remake I knew absolutely nothing of the themes, the characters and their story. This was a brand new experience for me.

So in this review you won’t find comparisons to the original and you won’t find complaints or observations about changes because this is a fresh perspective, somehow unspoiled after all these years – and I’d like to keep it that way.

The remake of Final Fantasy VII opens in such a thrilling and bombastic fashion. A soaring musical score full of dramatic flourishes and mournful vocals accompanies the sweeping cinematography that glides us through the setting of the story – the industrial nightmare that is Midgar. A rusted cog still somehow alive and pumping away.

After such a rich and exciting overture introduces our setting and cast of characters in operatic fashion, it’s off to the race – and the pace hardly lets up till it’s a couple hours later and we’re moving into Chapter Three of the first instalment of this remake.

From there, the pace slows down a bit. You’re introduced to a more intimate side of the world of the characters. Here, the slum they call home, feels alive despite the drab setting. After all, home is where the heart is and people make do! It’s all rather striking visually and it feels like a living and breathing world.

Don’t worry, this review isn’t a blow by blow of the ebs and flows of how this game plays out. I’m just mightily impressed by the pace of this game, by how polished and dramatic and emotive this product is. Because it sucked me into this world wholly.

Gameplay wise, Final Fantasy VII handles wonderfully. It feels more in line with the combat in FFXV than, say, the strategic employment of action in FFXIII. I’m okay with that – I cut my teeth on the hack and slash game first and found my love for the RPG later in life so the merging of this sort of combat works.

There’s enjoyment to be had for organising tactics across your party, just as there is enjoyment in switching and sensing the weight and different abilities they have. Whether it’s lending support as Aerith from a safe distance while Cloud gets in the face of the enemy or blowing the hell out of critters as Barrett before bellowing out the series’ old battle-ending fanfare. Combat feels uniquely different and fluid and fun.

Which brings me to the production of the game.

Final Fantasy, for my money, has always had fantastic music across the games I’ve played and VII continues that trend, bringing back the original game’s composer – Nobuo Uematsu – and teaming him up with Mitsuto Suzuki and Masashi Hamauzu. The result is a mixture of riches I tell you, with tracks that range from grand orchestral numbers to psychedelic funk ditties to emotional themes and gargantuan musical showdowns. It accentuates the big moments of this chunk of the story but also the smaller, intimate moments – like coming back to home in the slums and dropping to the ground to cuddle your mass of cats. You feel that just as much as you feel the hurt in a character’s theme.

As far as writing goes, well, writing in a Final Fantasy game has always been quirky or operatic or overly dramatic. Such is the style and cheek and charm of the series and such is the case here for VII. I don’t care. For all it’s oddities and soap opera qualities, it’s a hell of a ride, it’s themes are topical and strongly drawn, as is it’s characterisations. I mean, it knows what it is and does it rather effectively.

The game DOES slow down in a few places though, notably in the middle. Rather than to reflect, it focuses on a few side quests and other material. Kind of like the beginning of a second act that drags a bit.

It’s not bad by any means. Certainly a little eccentric – kinda like a goofy comedy – but just as I started to feel the dragging of the story, it picked up to propel me well into the next act of the game.

Visually, it looks spectacular. I mean, there’s moments where you can see the character is thinking something through. The anguish on their face shines out to me, the player. I’m old enough now to remember what it was like to see a gorgeous cutscene of a game, only for it to begin gameplay and see the difference. That wasn’t here for me. This game has some polish.

So. Overall, the first of this event remake took me around a bit under 30 hours. Last I checked before the climax, I was sitting at 26 hours. That’s huge when you consider this is only the first part of a game. And somehow, the cheeky writers over at Square Enix make this feel like the first arc finished in a satisfying manner. I’m a bit taken back to be honest.

Ultimately, Final Fantasy VII Remake is bang for your back. I enjoyed the storytelling, the musical score and the promise of things to come, without feeling like I’d fear I would – facing filler after filler. There’s a little of that here – the side quests range from fun to lacklustre – but it’s not distracting enough to detract from the overall entertainment value. Here’s to being alive for the next part of the entry.