Skip to content
Posted on May 29, 2020 by MisterJ Posted in Book ReviewsTagged Book Review, drama, Fantasy, horror, If It Bleeds, Stephen King 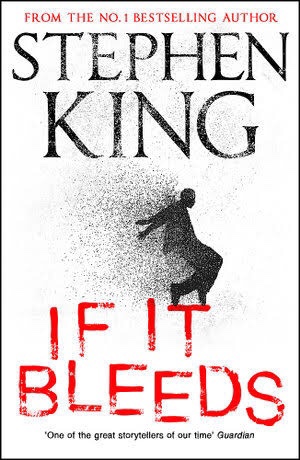 I always look forward to a Stephen King short story collection because you never know just what kind of story you are in for. Will it be grim and nasty? Will it conjure up nightmarish images to haunt your subconscious? Will it be a reflection on life and human nature? An otherworldly odyssey? Or all of the above?

IF IT BLEEDS, like FOUR PAST MIDNIGHT or DIFFERENT SEASONS before it, contains four novellas – Mr. Harrigan’s Phone, The Life of Chuck, If It Bleeds and Rats. How are these group of stories? Let’s dig into them.

MR. HARRIGAN’S PHONE is an interesting one, blending the likes of Hearts in Atlantis with something decaying and sinister from an earlier King novel.

For me, the story feels like a mix of horror and contemplative drama. There’s a sense of this short story being reflective and somber about life, love and the journey between childhood and adulthood. Then you’ve got nightmarish images that came to me with one sentence. I think of his writing in Pet Semetary and how this short story touches on that sort of dread and suffocating atmosphere.

Ultimately, it’s a short story that builds and builds….but doesn’t really go anywhere in the end. I don’t want to write that it fizzles out, more so that it ends a bit flatly and abruptly.

THE LIFE OF CHUCK is similar in that respects, as it starts in a very intriguing world that feels alien and feral —- and then, interestingly, it slows down, meditating on love and the sporadic embrace of living life in the moment like Jack London mused when he wrote about living, not existing.

IF IT BLEEDS, the titular novella featuring Holly Gibney from the – in my humble opinion – lacklustre Bill Hodges trilogy – sees her coming up against something otherworldly and evil. Evil being a major theme of the novella.

I’m intrigued by the theme of evil permeating throughout the novella, just as I’m interested in King’s characters toying with the ideation of evil and, dare I say, the shades of good and evil.

I like the character of Holly, I think she’s an interesting protagonist to follow, but for me I think the story is bogged down a bit in her life and relationships outside of work, as opposed to the central investigation to the story.

The otherworldly villain of the piece, I’ll leave for the reader to shed light on for themselves, but I feel like he could’ve been a bit more interesting than what is in these pages. A bit more depth, something that’s hinted at by other characters but not fully realised in the final act.

The last story in this collection – RAT – is by far my favourite of the stories, calling to mind the darkly funny work of Stuart Gordon but with a mythic feel to it, as King himself states in the Author’s Notes, it has a fairytale vibe to it.

It’s also quintessential King, featuring a troubled writer, isolation and a lingering nightmare that’s either made up or another reality bleeding into our world. Whatever the case, it’s the most tense and entertaining of this collection.

Overall, IF IT BLEEDS is one of the more weaker collections of short stories to date, something that – with Stephen King’s ability to write often – would be bound to happen sooner or later. It’s not bad by any means, the pages fly by quickly, but more often than not, I was left with a “Is that it..?” feeling once I finished reading.