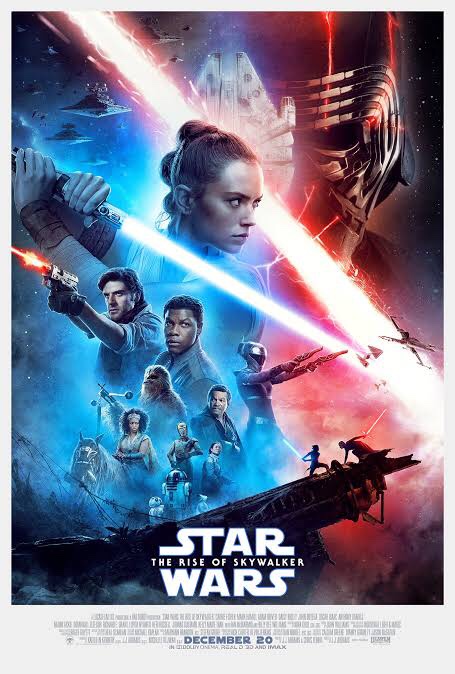 Walking out of The Rise of Skywalker, I found myself shrugging when asked for my opinion by the person I saw it with. Here was a film that suffered from a notable lack of a plan for a trilogy but had the task of tying up what story threads there are. It’s a strange place for a film to be in, especially given the controversial and cynical nature of The Last Jedi, but The Rise of Skywalker does a solid enough job working with what it had.

Emperor Palpatine is back! And looking particularly more gothic than he last did. I guess that’s the thing about nearly dying and coming back out of the dark after all these years.

Meanwhile, Rey continues to speed towards confrontations with herself and Kylo Ren (played by a wonderful Adam Driver) while completing her training with General Leia, a little plot point that works as best as it could, paying sweet tribute to Carrie Fisher without feeling gross and exploitative.

Rey is joined by Finn and Poe, all three paired together for what feels like the first time in the trilogy – it’s been some time since I’ve seen the previous two films so I may be incorrect on that front. Regardless, the end result is that both John Boyega and Oscar Isaac get more to chew on, which results in TROS feeling a lot like Return of the Jedi at times.

Daisy Ridley turns in a blistering, emotional performance, lending weight to Rey’s inner turmoil in a way that makes me long for a darker version of this movie. She certainly rises to the challenge of delivering on Rey’s final (?) chapter and surpasses it ten fold in my opinion. And, likewise, her counterpart Adam Driver, whose arc has been a little less defined but him being the ace character actor that he is, portrays such conflict in a real human and interesting way.

As for The Rise of Skywalker itself as a whole, what can I possibly tell you? J.J Abrams is a talented director and crafts a rousing adventure. The film looks great, has a lot of energy and emotion and the visuals are slick throughout.

It’s a film not lacking in technical achievements – cast and crew all hit their marks effectively, John Williams ties together all musical cues in effortless fashion, I love the man dearly – but it’s a film lacking in a focused story and, overall, in a story bible. It’s a very busy film, racing to tie up loose ends and because of that it is as emotionally perplexing and jarring as The Phantom Menace was, going from adventure to loss and grief to suspense back to grief.

It’s a film where I felt cheated as an audience member, because it doesn’t really commit to any of its big ideas that it establishes, as if it’s afraid to really settle one thing or the other. It backpeddles a lot, which is disheartening and frustrating.

That’s the sequel trilogy for you in a while though, a mismanaged series of films that have some really neat ideas but they don’t seem to gel with one another.

The Rise Of Skywalker is at its best when it’s focusing on – and wrapping up – the arcs of its new characters. In these circumstances, it does the best that it can with what it has to work with – but the script, from Chris Terrio and J.J Abrams, suffers a lot. A little on its own, with its own new ideas and devices, and a little because of the unfocused new trilogy as a whole.