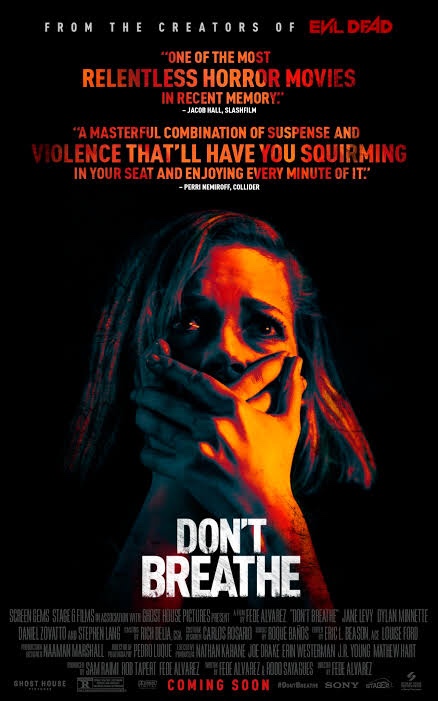 DON’T BREATHE is one of those rare thrillers that understand how to utilise everything at its disposal to tighten the tension and build suspense.

I think it’s a film Hitchcock would be proud of, from its clever use of sound and visuals to delivering even a bit of a twist on the home invasion setting we’ve seen time and time again.

You’ve got a great cast in that Jane Levy, Dylan Minnette and Daniel Zovatto are playing criminals – but there are grounds to be sympathetic for them. And the way these core three actors play them, minus Zovatto of course, who is having a lot of fun playing a grade A dick from the get-go, you can’t help but feel for them.

Sure, they’re getting what is coming to them when Stephen Lang’s The Blind Man proves to be a skilled combatant. But then things take a turn for the dark and you might just find yourself re-evaluating the situation.

Stephen Lang is amazing, by the way. His character is broken, defeated, just willing to fight back against the intruders. He’s a character that’s terrifying and yet you can understand how he came to be terrifying. There’s a background there that’s quite interesting.

Fede Alvarez has been quoted as saying this film was a reaction to the critics of Evil Dead, who thought it was too bloody and focused on shock value (funny that for an Evil Dead film, eh?) and so he set off to make Don’t Breathe focused instead on suspense. In my opinion, I think he really pulled it off here and showed some true class when it comes to staging some of the sequences in the most excruciatingly tense way.

Of course, he can’t help himself with some shock value jump scares. There’s plenty of that in here – and one might dare say that under the wing of Sam Raimi, you couldn’t not throw some in. And you know, it does the trick. It affected me in parts.

So if you’re finding yourself in need for a good thriller one night that satisfies, do yourself a favour and check out DON’T BREATHE. It’s got a terrific cast, it’s excruciatingly tense and it’s got a neat little story that twists and turns.