‘Poor old George. I don’t know what he’s doing now but he definitely was the architect of his own demise as a film star’

As I’ve been going through the James Bond series of late, I’ve been doing extensive research on the making of each film as I go — and OHMSS has the type of in-the-making story that is almost as epic and weird as the strangely edited and stripped back affair itself.

The film has a weird, sort of manic, energy to everything that’s going on. Whether that’s because the film is conscious about going back-to-basics Bond or whether it’s a sign of a troubled production moving on from Connery, I’m not entirely sure – but the end result is that whatever energy is captured in the production and performances renders me unable to look away. 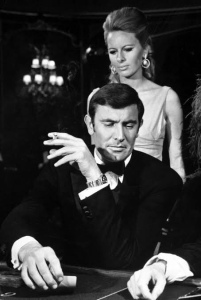 The then 28/29 year old George Lazenby as Bond is a bit all over the place – relaxed and in his element in one scene and a bit stiff and noticeably Australian the next. Nevertheless I will say that, as a first time viewer, he’s interesting to watch. What he doesn’t quite find in body language he more than makes up for in the physicality of the fight scenes. And any self-doubt and conflict that drove Lazenby off-screen makes for a Bond who is unique for having this underlying turmoil you can spot there in his eyes. For the first time he’s vulnerable – and that carries through right to that ending.

It is strange, I should note, that for a good chunk in the middle of the film, he’s dubbed by another actor. It fits, storywise, despite being a strange sort of experience as a viewer, but I can’t help but feel it’s a display of distrust in Lazenby on the producer’s part.

I think I would’ve loved to have seen him follow up this outing. If Lazenby were to continue I think we’d see him grow more at ease in the role with time. But who can really say, after all these years?

Telly Savalas is Blofeld this time, taking over from Donald Pleasence – who looked comically short beside Connery in You Only Live Twice. I must say – I like Savalas in the role. His voice suits it, exuding menace and ease. He looks like he’s having a blast in the role, chewing up his scenes. I hear that he liked to gamble behind the scenes with some poker too!

As Tracy, Diana Riggs is ferocious and rises to the task to be equal to Bond. I must admit – I did find her delivery, in the beginning, to be a bit stiff – but this changed as the film went on. She’s simply charming, inside and out and I can get a glimpse of why these two characters would be drawn to one another – even though the beginning of their romance is glossed over in a sunny montage. Though adding any more to this 142 minute movie would bog down an already slow event movie even more.

On Her Majesty’s Secret Service isn’t perfect for me. Outside of slight qualms with performances and story beats, I find it a bit slow and the editing in the action sequences can feel incoherent and choppy. Nevertheless, the stripped back and gritty and tragic arc is quite different from what we saw in the previous five films and it was this tone and approach that kept me watching with curiosity to that heartbreaking and abrupt ending.