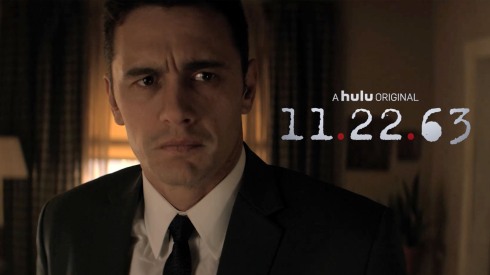 ‘The Rabbit Hole’ is the first part of an eight part mini series that sees ‘Jake Epping’ (played by James Franco) presented with the chance to travel back to the ’60’s to attempt to prevent the assassination of JFK, which in turn could prevent a number of horrific parts of history as we know it. Or so says Al Templeton (played by Chris Cooper), who possesses a diner with a storage room that has the ability to take you back to 1960.

The Rabbit Hole wastes no time getting to the point with the audience and feeds them information as quickly as Al Templeton feeds it to Jake. The result is perplexing, partly because it all happens so quickly that I wished it had taken the time to establish character relationships a little more before jumping off the diving board.

So yeah, to me the pacing is a little shaky to begin with and everything feels rushed to get to the main attraction. Which is strange because this first entry is eighty minutes long and could’ve easily taken a little more time to establish Jake’s world before we see him go back to the 60’s.

But what am I talking about? The 60’s are the main event – and boy does it look great. The cars, the fashion, the detail – my goodness. Let’s all take a moment to praise Carol Spier, the production designer. Her credits include Silent Hill, The Brood, Scanners and Hellraiser I believe. And the attention to detail here for the sets and so forth is spectacular. I can’t wait to see what comes next.

Kevin Macdonald (The Last King of Scotland) directs this episode and the end result is a lavish looking piece. It’s rich in its cinematography, works well at creating tension and he gets excellent performances out of his cast.

James Franco is a charming guy, man. And here as the average teacher caught in something bigger than he is, he rises to challenge to capture that shock, confusion and in the end, to blend in with the past, warmth.

As this part sticks mainly to his adventure, it’s hard to say how the others players fare as their time to shine doesn’t arrive in these eighty minutes. Sarah Gordon makes an appearance as Sadie, who some of us know to be Jake’s love interest, but it is brief and only teases at their budding relationship. She is quite captivating though, giving off a certain radiance.

These are early days in 11.22.63 but we have 7 hours left of the journey and though it gets off to a shaky and rushed start, it soon turns itself around and makes for thrilling entertainment.