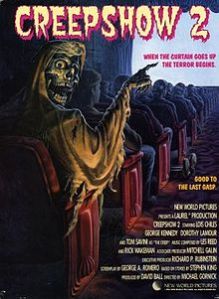 George A. Romero and Stephen King’s collaboration continued in Creepshow 2, this time being directed by a Michael Gornick while the gruesome twosome write the stories and screenplays.

Another added plus is legendary Make-up artist Tom Savini’s presence as the titular Creep, an ugly looking thing that reads the stories to the audience and cackles. This time around there are only three stories – Old Chief Wood’nhead, The Raft and The HitchHiker.

Old Chief Wood’nhead sees a wooden indian perched outside a grocery store come to life to avenge it’s store owners after they had fallen victim to a brutal robbery.

Now, it may be 2015 where advancements have been made in the way of effects but watching this wooden statue blink and come to life is fantastic – and it’s surprising to see the effects have held up quite nicely to this day.

When Ol’ Chief goes about avenging the deaths of his carers, it is cheesy 80’s horror movie gold.

The Raft, based on a short story by Stephen king (see his short story collection Skeleton Crew), sees a couple of college students heading out to the lake for a bit of R & R, only to come across a man-eating oil slick that’s waiting and hungry. It’s short, unsettling and straight to the point and the effects are glorious in all their gore and nastiness.

To top all the madness of with a bloody cherry, you have the atmospheric The HitchHiker, showcasing not only fantastic and disturbing make-up effects (oh, you’ll see) but quite an amusing cameo from the man himself, Mr. King. Its this suspenseful and nasty short story that is the highlight of the collection. 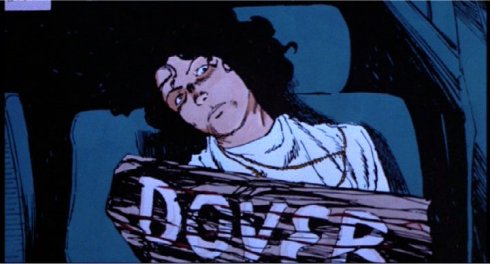 In between the segments there are cartoon interludes that make up the wrap around story. They feature The Creep (voiced by Joe Silver) and follow a young boy around town. Personally, it’s hard to see why it’s in the film at all because they are jarring to the experience and ruin the bleak mood that comes with the stories but it all ends pretty nastily anyhow so that’s something I guess.

So I’ve got to say it: Creepshow 2 had more enjoyable segments than the first film, and it’s pure 80’s cheese that makes it’s so enjoyable. It’s over a little too soon and the acting is pretty flat in some parts but if you’re a gorehound, you’ll love the effects work on display in all segments and if you’re a horror fan, you should definitely give this a go.

If you’re looking for a breezy, entertaining horror film then this creepshow has just the right thing for you…