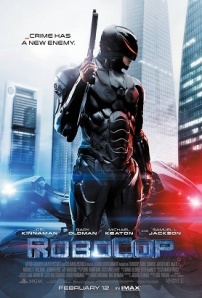 I feel I should start this review by saying I have not seen the original films.

Yes, I’m aware I’m insane for that fact. The reason behind that? I just haven’t gotten around to it.

Anyway, I went into this slick reboot of Robocop only knowing….well, that he was a Robocop.
I knew little of cast or crew but I sat down in a comfy cinema chair anyway to see what people were up in arms about and you know? It’s not all that bad.

We’ll get to the good first – this slickly made reboot is rather effective for the most part, as it’s got its heart in the right places, poses some ethical questions that got under my skin and made my viewing all the more engaging and it’s got a rather talented cast that lift what could’ve been an otherwise flat script.

I enjoyed that it focused on the man and his family and examines with a little more care what it means to be half man / half machine and exactly where does the man fit into the picture?

Joel Kinnaman is in the lead here does a terrific job at capturing Alex, the police cop that’s been horrifically twisted into this…well, Robocop.
I could watch Gary Oldman in anything because that man just jumps into any role and gives it such weight and heart.
Michael Keaton turns in solid support as the slimy CEO of OmniCorp and Abbie Cornish puts her heart into the role of Alex’s wife.

In other hands, this could’ve been a disaster but this terrific cast and crew manage to make this an entertaining and rollicking sci fi and I had a blast with it.

As for the bad, I don’t care much for the flashy editing during the action that makes the sequences incoherent and frustrating.

I also feel the last half of film is rushed and could’ve been stretched out to wrap the plot up a little more carefully.

All up, it’s not the stinker I thought it would be. The cast and script give it heart and this works wonders.
Whether you want to see it depends on much you love a original but either way, I think you should catch this on the big screen and make up your mind.